If you are considering opening a business or investing in the Principality of Andorra, you should know that it is one of the best countries where you can do so, apart from its tax benefits also for many others that we will detail throughout this article.

The Principality of Andorra has a stable political framework and a dynamic economy, and this makes it one of the most attractive countries when it comes to investing. Andorra has a financial and economic model that makes it a very suitable and profitable country to live in.

In this sense, we must state that the low level of prices and the low fiscal pressure allow the cost of living to be lower than in most European countries, so that our future citizen investors and their families will be able to enjoy prices in most products and services much more competitive than in their countries of origin.

Andorra makes its limited territory one of its great virtues. Proximity helps to resolve most of the issues that excessive bureaucracy complicates.

As for communications, the Principality of Andorra is in the process of improving and rethinking communication channels that will make it much more accessible by land and air.

Andorra is a socially stable country with high citizen security. The crime rate is one of the lowest in the world.

In education, Andorra has three free, high-quality educational systems, as well as Spanish, Andorran and French education. Likewise, it also has several private teachings such as "British English" and other specialties.

As for public health, it is of high quality and also allows, via international agreements, to benefit from health care abroad.

Andorra is an innovative and pioneering country in the field of technology: the analogue switch-off and UMTS coverage have already taken place, and there is fiber optics in the territory's 100%.

On the other hand, it should be said that the automatic exchange of information on tax matters Andorra is aware of the trend towards transparency at the international level and its response in this regard has been along the same lines, understanding that automatic exchange is an unavoidable future for all jurisdictions worldwide.

Currently, a total of 51 countries have signed the multilateral agreement for the automatic exchange of tax information in relation to certain financial accounts of individuals and legal entities not tax residents in Andorra in Andorran banks. It must be taken into account that the vast majority of the participating countries will apply this agreement in 2017, but Andorra has signed to start this procedure in 2018.

At the beginning of 2015, only 4 countries did not express their commitment to adhere to this agreement, but everything suggests that international pressure could be decisive in this regard. The application of the automatic exchange of information in tax matters will come into force in Andorra in 2018, but it must be considered that it is expected to be retroactive for one year. The details of the accounts that will be reported or in general of the application of this automatic exchange are not yet known.

On the other hand, it should be said that regarding holding companies with participations in other national companies of third countries. These companies enjoy tax exemption on dividends obtained, as well as on capital gains in the following cases: 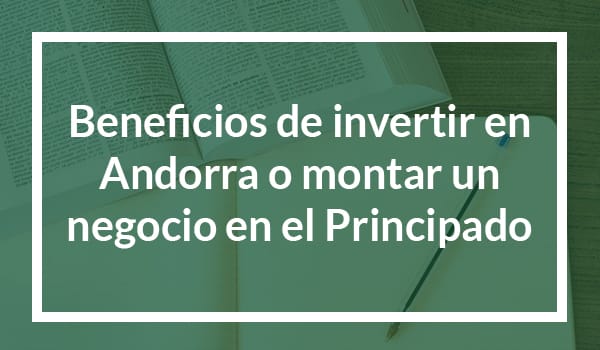 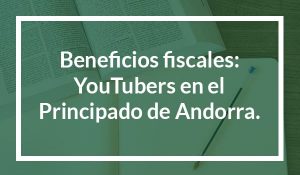 Tax benefits: YouTubers in the Principality of Andorra

Why do YouTubers want to live in the Principality of Andorra? One of the main reasons for coming is undoubtedly the considerable tax reduction that 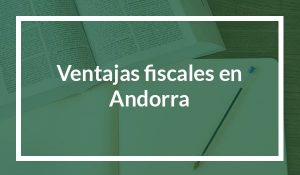 Andorra, along with Monaco, has the lowest crime rate in Europe. A sophisticated healthcare system coupled with clean air from 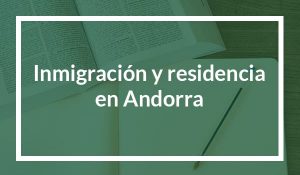 Immigration and residence in Andorra

Residing in Andorra is synonymous with living in a fantastic natural environment, in the heart of the Pyrenees. But it is also safety and a high level of quality 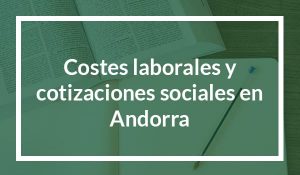 Compared to Spain or France, labor costs are notably lower. The same happens with Social Security contributions, which

Contact
PrevPrevious articleThe immigration reform: what new models of residences without a work permit exist in the Principality of Andorra?
Next article What is considered foreign investment in Andorra?Next

At Ara Advocats we believe in a good and honest fight, and our priority is to persevere in the interest of our clients.

Tax benefits: YouTubers in the Principality of Andorra

Immigration and residence in Andorra